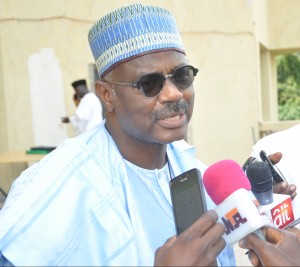 Prof. B.H Usman is a dedicated academic who during his 32 years of service at both University of Maiduguri and Modibbo Adama University of Technology Yola garnered extensive and leadership management experience in higher Education.

He was elected, Dean of School of Agriculture and Agricultural technology, Dean School of Postgraduate Studies and was the Coordinator Chevron Biotechnology Centre of the University. He was elected Deputy Vice Chancellor Administration twice and later acting Vice Chancellor. He was appointed Vice Chancellor of Modibbo Adama University of Technology Yola, which has an annual budget in excess of $280million and student population of 18,000 and staff strength of 1500 staff saddled Prof Usman with the enormous task of developing the University to international standards. Today Modibbo Adama University of Technology is acknowledged as one of the fastest growing Universities in the country with well-equipped modern Laboratories, Libraries, ICT teaching and learning infrastructure. During his tenure the ranking of the University improved on four consecutive years by measurements of key performance indicators of University ranking by the Nigerian universities regulator, such as attracting external research grant and collaborating with foreign universities in sharing international best practices.

Prof Usman served in many other capacities in the academia, as member of several committees and chairman of several other committees such that he was the pioneer Director of Research and Innovation at ATBU Bauchi, Team leader, monthly Technical Review meetings of Adamawa State Agricultural Development Project (AADP). He was Postgraduate external examiner and professorial external assessor to several universities in the country. He has supervised and graduated several undergraduate and postgraduate students.

Prof Bashir H. Usman became involved with Research activities soon after graduation in 1982, where he was posted to Rubber Research Institute for his NYSC. Thereafter, his research contributions in Agriculture, Soil Science and the Environment earned him an Honour as Fellow of Soil Science Society of Nigeria (FSSSN) and Fellow Nigerian Association of Hydrological Sciences (FNAHS). Similarly, his administrative and leadership qualities earned him recognition by the Nigerian Institute of Management where he was honoured with membership (MNIM).

Prof Bashir H. Usman’s research activities also led to publications of several articles in both national and international peer reviewed journals and book chapters. He attended several conferences and contributed to several conference proceedings. He also obtained several certifications on global leadership, policy development and global networking and partnership from several countries such as South Africa, the U.K (London School of Business and Finance), UAE and Republic of South Korea amongst others.

Prof Usman served in many other community related committees including the membership of the Governing Council of Gombe State University, and member Tertiary Education Trust Fund, Technical Advisory Group on Book Development.

After a successful career at the Modibbo Adama University of Technology as Professor and Vice Chancellor, Prof Usman transfer his services to Federal University Kashere as Professor of Soil Science in the Faculty of Agriculture.

Prof Bashir Haruna Usman with a strong public service record having acted as advisor and member of Federal and State governments  initiatives in the provision of infrastructure, widening access in both basic and higher Education and enhancing quality of teaching and learning was appointed Executive Secretary, National Commission for Nomadic Education with Headquarters in Kaduna in 2016.

Prof Usman enjoys reading and jogging, and is married to two wives with four children.